Ben Prunty chats with us about Cipher, his longest album release yet 08 November 2016 10:17 AM | No Comments

From an unknown, fledgling indie game composer to a mainstay on Bandcamp’s soundtracks page, Ben Prunty’s success often comes back to the game that started it all – FTL: Faster Than…

How does Rise of Iron’s soundtrack fare without Martin O’Donnell?

Crash Bandicoot is 20 years old! Also, I am old.

2016 was a tough year, for sure. However, even with the loss of such musical icons like David Bowie, Prince, and George Michael (and many others, as well), there is still a tremendous amount to celebrate.

This year saw some the largest and most diverse video games released to date, all featuring amazing soundtracks by dozens of talented artists and composers. Both indie and triple-A games alike featured a vast selection of music spanning electronic, metal, orchestral, retro, chiptune, hip-hop, or even a mixture of these genres.

If you’re looking for some musical diversity in video games, look no farther than 2016’s remarkable selection. If this was a down year for you, then let this be a glimmer of hope that the future is very, very bright.

END_OF_DOCUMENT_TOKEN_TO_BE_REPLACED

Get a taste of Mass Effect: Andromeda’s soundtrack from the gameplay reveal trailer

At long last, Mass Effect fans can rejoice after seeing the official gameplay reveal for Mass Effect: Andromeda during The Game Awards 2016. The trailer, lasting just under five minutes, reveals tantalizing snippets of gameplay, along with excerpts presumably from the soundtrack.

No composer has been officially announced by Electronic Arts or BioWare, but stay tuned for any updates. Until then, enjoy the 4k trailer above with some headphones.

Cat’s out of the bag. Yes, I am composing music for #DeathStranding, it’s an honor to once again work with @KojiPro2015_EN @Kojima_Hideo https://t.co/jgv0R9jlOm

Little is known about Death Stranding at this point, other than it is a dark, open-world RPG starring Normal Reedus and Madds Mikkelsen as the protagonist and antagonist, respectively. You can get a taste of the music from the trailer that aired during The Game Awards 2016 below:

In addition, hardcore fans should be pleased to know that the music from the trailer, by Icelandic band Low Roar, will be released on vinyl due to a collaboration between the band, Kojima Productions, PlayStation and Mondo. The 12-inch single of “I’ll Keep Coming” and “Easy Way Out,” which is available for pre-order now and ships in February 2017, will be pressed on 180 gram clear vinyl with heavy black splatter.

Watch the full Doom performance from The Game Awards 2016

It’s been fun seeing Mick Gordon, Sascha Dikiciyan and Matt Halpern tease their live Doom performance on Twitter this week, and after much hype, tonight they delivered. In case you missed it during The Game Awards broadcast, here is their full set.

Each of the musicians brought incredible energy, and the crowd seemed super into it. Gordon especially relished every second, jumping back and forth on stage and getting into fans’ faces. It was great fan service to Doom (and Quake) fans, as well as the audio quality of the Doom soundtrack.

It’s incredibly rare to see musical artists gather for a single show for a game soundtrack like this, and hopefully after tonight, it won’t be the last.

Below are five full length tracks by Dikiciyan (aka Sonic Mayhem):

In short, the soundtrack is sounding very, very good. It’ll be interesting to see how the soundtrack fares releasing so long after the game. DE:MD came out in late August and likely isn’t a hot topic of discussion now due to the smorgasbord of triple-A game releases this fall.

The final soundtrack will feature 29 tracks, including four that were used for the trailers. Check back once we’ve had a chance to listen to the full album for a review.

Composer Mick Gordon made the announcement today with a quick tweet containing only this image: 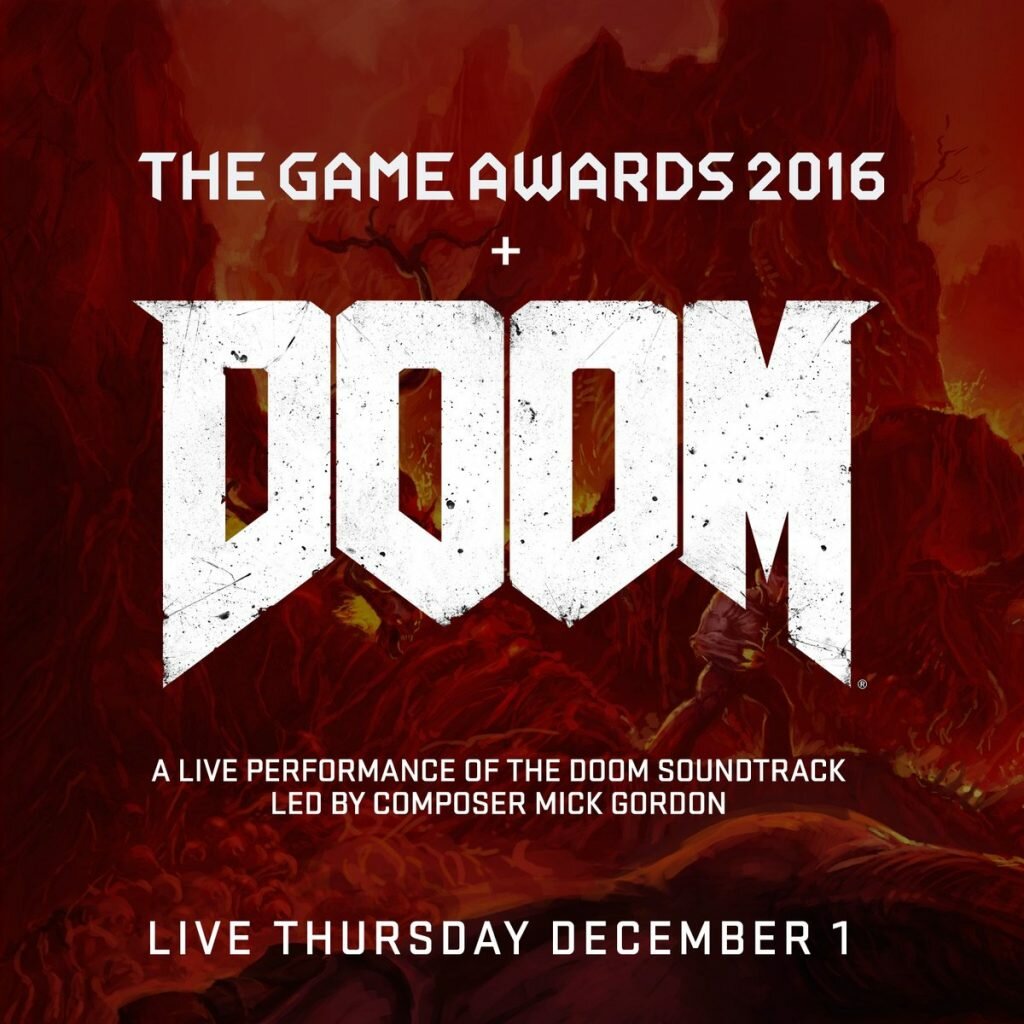 No other details regarding the setlist, other performers, or even the time of the performance are known yet. The event will be livestreamed, however, so fans wanting to tune in should be able to catch the performance.

Earlier in the month, Gordon asked his Twitter followers which songs they would like to see live, implying the possibility of future performances. The majority of fans responding asked for “BFG Division”, “Rip & Tear”, or just simply the whole album. There’s only six days remaining until the event, so stayed tuned for any updates.

Mick Gordon announced today on Twitter that artists Sascha Dikiciyan (aka Sonic Mayhem) and Matt Halpern (Periphery) would be joining him onstage for the live performance of Doom’s soundtrack at The Game Awards. Judging from Halpern’s Twitter posts, the show will be a Doom medley, and will definitely feature fan favorite track “BFG Division”.

Halpern is the drummer for a progressive metal band called “Periphery” which features Misha Mansoor on guitar. Mansoor contributed to the “Sepiks Redux” track on Destiny: Rise of Iron‘s soundtrack as well as two tracks from the Halo 2: Anniversary soundtrack. Periphery put out an album in July of this year titled “Periphery III: Select Difficulty“.

Dikiciyan has also had a busy year, having just wrapped up his latest soundtrack for Deus Ex: Mankind Divided, which is out this Friday, December 2, just a day after the Doom performance. He has a long list of video game soundtracks to his resume, which include the Mass Effect franchise, the Borderlands franchise, and Quake 2 and 3. With Quake also being a Bethesda franchise, don’t be surprised if Dikiciyan sneaks in some of his Quake music to the Doom performance as well.

Ben Prunty chats with us about Cipher, his longest album release yet 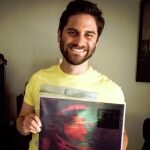 From an unknown, fledgling indie game composer to a mainstay on Bandcamp’s soundtracks page, Ben Prunty’s success often comes back to the game that started it all – FTL: Faster Than Light. It’s been more than four years since the release of FTL, and Prunty has carved out his own style of ambient electronica within the indie games scene that his fans have come to know and love him for. Soothing yet stimulating, Prunty’s music strikes a sweet spot for those wanting something nice to listen to while studying, working or reading, without being completely distracted by it.

With several game soundtracks and solo albums under his belt, Prunty now adds a documentary score to his library of releases with Cipher: the Score for Banking on Bitcoin. Featuring more than 90 minutes of music, it’s by far his longest release to date, and demonstrates some of his best composition yet while still maintaining his signature sound of chill, ambient electronica.

Prunty was kind enough to take time from his busy schedule to answer a few questions for us about Cipher, and offers fans a unique, in-depth look at his thought process and some of the behind-the-scenes workings that went into Cipher’s creation.

END_OF_DOCUMENT_TOKEN_TO_BE_REPLACED

After many years in development, Sony’s The Last Guardian is finally coming out on Dec. 6, 2016. The soundtrack, composed by Takeshi Furukawa, will follow sometime in early 2017 with both a vinyl and digital release via iTunes and the PlayStation 4 music app.

The Last Guardian joins the growing list of video game soundtracks coming to vinyl, which can be preordered now via iam8bit for $35. It will feature a tri-fold cover with artwork from illustrator Nimit Malavia, pictured below. 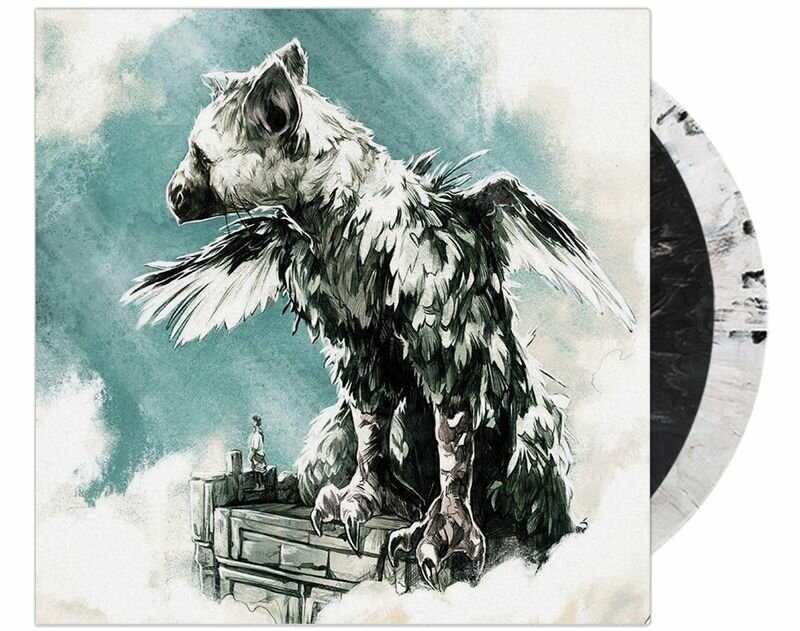 You can also get a sneak peak at the game’s soundtrack below with a “making of” video.

Electronic Arts Music has officially released the soundtrack for their World War 1 shooter Battlefield 1 on iTunes. Comprised of 25 tracks and 68 minutes of music, the soundtrack is composed by Swedish film composers Johan Söderqvist and Patrik Andrén. 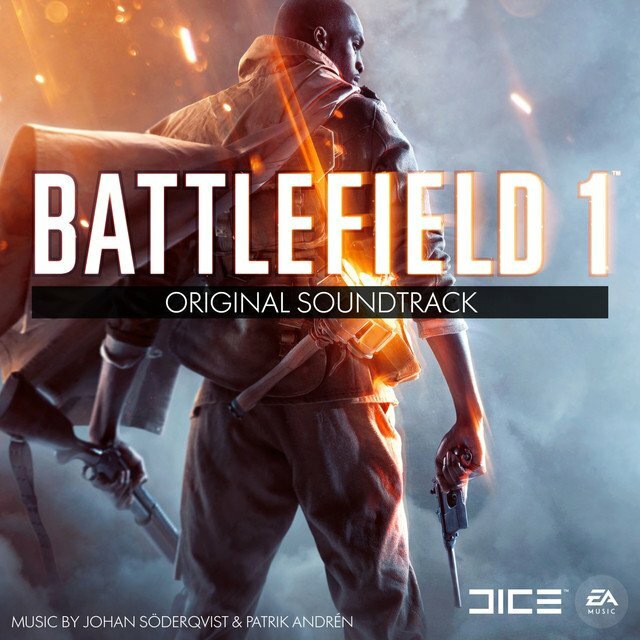 DJ and producer Grimecraft returns to GameChops with this epic remix of the beautiful “Aquatic Ambiance” from Donkey Kong Country!

It’s hard to believe that after more than 20 years, this Super Nintendo classic still gets remixed regularly. Here, Grimecraft’s remix fits into the “party mode”, so if you’re looking for a chill, coffee-sipping, book-reading kind of song, this might not be what you’re looking for. Whip this out at parties, though, and the less informed might not even realize it’s from a video game. Thick beats, epic bass, and pretty dreamy melodies throughout.

Give it a listen above, and check it out on iTunes, Spotify, and Google Play.