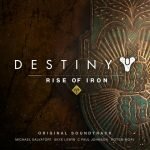 Like the game itself, Destiny’s music has seen it’s fair share of controversy over the last couple of years. After the unusual and abrupt dismissal of in-house composer Martin O’Donnell, followed by a class-action lawsuit and court settlement, many fans wondered how Bungie would continue Destiny’s music without him.

Last year’s Taken King expansion was the first addition to Destiny without music credited to O’Donnell. The soundtrack as a whole was very good, although much darker and different sounding than anything in the original game. You could tell there was a difference without O’Donnell’s signature touch.

With 2016’s expansion Rise of Iron, that difference is far less noticeable.

It’s clear Bungie’s audio team, which still consists of O’Donnell’s former colleague Michael Salvatori, went to great lengths to create a soundtrack that was fitting to Rise of Iron’s heroic imagery, but also nostalgic to longtime fans of their previous work. In other words, anyone familiar with Bungie’s Halo games should have a lot to enjoy here with Rise of Iron’s. Choir chants, rolling percussion, electric guitars – it’s all here. Even some of the chord progressions sound similar to parts of Halo, and yet it all fits so well into Destiny’s universe.

Halo similarities aside, RoI’s soundtrack manages to carve out its own identity, while still effectively conveying a tremendous sense of heroism, nobility and even solitude to players. That is probably this soundtrack’s greatest strength, is that it evokes emotion at all the right moments during gameplay, so that you feel the importance of what you are doing. It’s not often that even a full length game’s music will make one feel a sense of courage, or mystery, or genuine nostalgia to the point of tears, but all that happens here. All the more impressive since RoI is a relatively short piece of DLC.

Definitely buy if: You were a fan of any of the Halo soundtracks, and/or you enjoyed the music in Destiny’s original soundtrack from 2014.

Instantly recognizable as the menu music, most people sadly won’t hear this track past the first 30 seconds. While the middle of the song is admittedly slow, it more than makes up for it starting at the three-minute mark. What follows is some of the most empowering and heroic music I’ve heard in quite some time. The use of this track during one of the exotic weapon quests is enough to make the hairs on your arm stand up. A strong opener for this soundtrack.

Shadow of the Walker

Quintessential Halo right here. You can definitely hear parts of Halo 2, Halo 3: ODST and Halo: Reach. Even now when this track starts playing, I look down at my MP3 player, second-guessing myself as to which game it’s from. Certainly a compliment, and a fantastic battle theme for Rise of Iron.

I can only imagine the audio guys having a blast making this track, which seems directly inspired by Mad Max: Fury Road. It’s chaotic, frazzled, and definitely unlike anything else in Destiny’s library of music.

Another battle theme, this one perfectly conveys a sense of desperation without being too stressful to listen to. The elegant strings are wonderfully contradicted by the percussion and choir work, and doesn’t overstay it’s welcome by becoming too repetitive.

A powerful track full of epic strife and conflict. The player is often referred to as “Young Wolf” by Lord Saladin, and this song is appropriate for such a title. Fierce and strong, it provides the player with great audio incentive to drive back the Devil Splicers.

Peaceful and solemn, this beautiful tracks plays during the players’ time at the Iron Temple social space. You truly get a sense that the place you’re at is ancient, and rich with history. There is also a hint of sadness, driving you to know more about the Iron Lords’ end.

Another pleasant surprise, this high-octane, heavy metal remix of the original “Sepiks Prime” track is great fan service. Harkening back to the old Halo days, “Sepiks Redux” is more fierce and aggressive than anything they’ve done in the past.

Two fun facts about this one: 1.) Both “Sepiks Prime” and “Sepiks Redux” are track #22 on their respective soundtracks, and 2.) “Sepiks Redux” is performed here by Misha Mansoor, who contributed to the Halo 2: Anniversary soundtrack as well.