By
Jasper Watkins
– January 27, 2012Posted in: Choice Soundtrack of the Day, Features 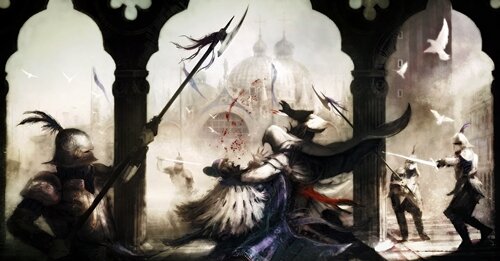 The composer Jesper Kyd has produced some phenomenal tracks, most notably those in Assassin’s Creed II, where we are first introduced to assassin Ezio Auditore. The music fits perfectly with the mood and atmosphere set in the game, as well as the historical setting. Whether Ezio is dashing across rooftops or mourning the loss of his family, the music blends into the background adding that much needed depth which many video games lack. The most effective of the tracks from the Asssassin’s Creed 2: OST are “Ezio’s Family” and “Venice Rooftops.”

The eerie voices used in “Ezio’s Family” combined with the strong strings section really adds a touch of emotion, and this is really felt in those crucial parts of the game. For instance when Ezio’s father and brothers are murdered the track is played softly in the background to great effect. The acoustic guitar also gives it that quasi-Renaissance feel while the heavy electric guitar chords used towards the end of the track reflect the other gritty, modern setting of Assassin’s Creed II.

My personal favorite track of this game, though, has to be “Venice Rooftops.” The melodic intro is quickly accompanied by fast paced percussion which, when playing the game, really adds drama and pace so you truly feel like an assassin on the run. It also adds a slightly more aggressive feel to the game because after all, you are out to avenge your family and kill a lot of people. Similar to “Ezio’s Family,” the string section here is very effective, whether it is the high pitched scalic violins or the deep cello, the atmosphere of drama and tension is maintained throughout.

For you fighting fans, due to Ezio Auditore being a playable character in Soul Calibur V, there is also a remix of “Venice Rooftops” (written also by Kyd) which has the same effect, albeit slightly more funky!

No stranger to video games or writing about them, Jasper is a writer for DontHateTheGeek.com and spends most daylight (and some night time) hours kicking back with some games. He is also the worlds #1 fan of Scott Pilgrim.