Sonic 2 and Tetris – The Best of Videogame Soundtrack Remixes 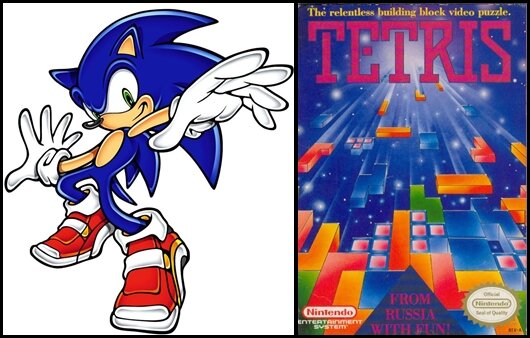 In the last installment of The Best of Videogame Soundtrack Remixes we covered Zeldastep. In this feature we are going to cover two more iconic video games whose soundtracks have well and truly been made even more awesome. We will be covering Sonic the Hedgehog 2 and the classic 80s game Tetris.

Tetris  was released in 1984 and immediately won over the hearts and minds of gamers even until this very day. In 2009 Game Informer rated Tetris #3 on their list of the 200 best video games of all time. And of course to accompany such a catchy game you must have a catchy soundtrack, which Tetris definitely does. Tetris was first created in Russia by Alexey Pajitnov while he was working in the Dorodnicyn Computing Centre of the Academy of Science of the USSR. Tetris‘ Russian heritage is certainly not lost in the soundtrack, and immediately conjures up images of the motherland with its upbeat feel .

*This remix does contain profanities* The remix comes from the DJ Doctor P. This track opens with the original soundtrack with a slight rumble of bass to hint at what we can expect to happen. The original tune winds down in the cliche way, as if it is breaking down, and after a short swear word the bass kicks in. Doctor P makes effective use of  a variety of pitch ranges in this first section, although it is not as catchy as later on in the track, it is pretty neat. There is a slow breakdown, only interrupted with a “its Tetris”, which is followed by a brief clip of a heavily synthesised version of the original theme. The track repeats the bleeps and bloops that followed the opening, giving the track a slightly monotonous feel. Although this may not seem like the best remix it was chosen on the grounds that it was the inventive, manipulating extracts from the original soundtrack  into the track very effectively. Another remix that sticks more to the original soundtrack is Basshunter’s, who hardly strays from the original sounds, adding a solid bass beat and the odd bit of variation.

The next remix uses a track from Sega’s 1992 Sonic the Hedgehog 2. This game was immensely popular selling around 6 million copies of the Sega Genesis, making it the second biggest selling game on the console. Second only to its predecessor. Although it ranked #61 on Game Informer’s list of the  200 best video games of all time (lagging way behind Tetris) the game has been described as the most finely polished Sonic title.

The remix is of one of the stages in the game, Emerald Hills, by 0SM and is truly amazing. Although it is does not feature any clips from the original track it  is possible to hear where 0SM took his inspiration from. The track opens with a strong beat which erupts into the tune. This variation in dynamics is something 0SM employs throughout the track making it that bit more interesting to listen to. Another feature that is particularly noteworthy is the use of the coin sound effect just before what can only be described as the chorus. Like the majority of the electronic tracks there is a lot of repetition, so it does have a tendency to get a bit dull, but when the final drop kicks in I can guarantee you will be dancing around. This Emerlad Hills remix can be downloaded from 0SM’s soundcloud.

No stranger to video games or writing about them, Jasper is a writer for DontHateTheGeek.com and spends most daylight (and some night time) hours kicking back with some games. He is also the worlds #1 fan of Scott Pilgrim.

Preorder The String Arcade album now for a 20...