This past weekend, I had the awesome opportunity to attend my first video game convention, PAX East, up in Boston, MA. Among the panels I attended was “Behind the Music of Blockbuster Video Games,” which featured some of gaming’s favorite composers: Jack Wall (Myst III, Jade Empire, Mass Effect), Jason Graves (Dead Space, Tomb Raider), Greg Edmonson, (Uncharted), Kevin Riepl (Unreal Tournament, Gears of War, Aliens: Colonial Marines), and Inon Zur (Dragon’s Dogma, Dragon Age, Fallout 3). The panel was hosted by Emily Reese, who also hosts the Top Score podcast over at Classical Minnesota Public Radio. The panel opened with an introductory video accompanied with a sample of each composer’s work, which unfortunately experienced audio problems in the beginning. Then Emily began asking questions of the composers.

First, Emily asked about the composers’ efforts with building character. Jason noted that he had a different experience with scoring Tomb Raider than with Dead Space because instead of trying to be loud and scary all the time, he had opportunities to build her character by starting quietly and building from there. Inon, who’s from my birth country of Israel, then followed with describing his experience but humorously came out with the line, “We want to touch you.” That inadvertently set a comfortable and joking tone for the rest of the panel with the other composers warning PAX attendees to keep their kids away from him.

The next question was about each composer’s favorite scene to score. Jack, who stressed that their roles were to “make emotional experiences instead of interactive ones,” talked about the suicide mission of Mass Effect 2. Apparently, Casey Hudson approached him rather early about making the music for it well before it was fully developed. He only told Jack that it was the final mission and there is the worry that none of the protagonists would survive, so he went with that. In the end, when the scene was finalized, the music he made was still perfect and was what ended up in the game. Jason described scoring the radio tower scene in Tomb Raider, which appears in much of the advertising for the game. He stated it was the only scene he did multiple versions of, and the final cut was actually made of all three spliced together. Kevin Riepl said his favorite was the final scene in Gears of War, and Inon brought up the final scene in Syberia 2, which really struck a chord with me.

The composers then went into a small discussion of the parts they play regarding these games. All of them seemed to agree on how they play a solely emotional part of game making. Greg said something that really struck me: “Music should not lead you by the nose and tell you what to feel.” He suggested that the player is not stupid and should use all facets of the game – the music, cinematics, and gameplay – to feel, and it’s not the music’s job to direct that. Inon also expressed significant respect for the fans, stating, “You have someone really important [to compose for], and that is the player.” He also said, “Melody is the first thing you’re connected to,” indicating that he tries to write a simple song that will remain with the player after the game is complete. Jack spoke briefly about his experience with conducting at Video Games Live, and he said the number one music request was always Final Fantasy. To him, it was a testament to how memorable the music from that series (the majority composed by the brilliant Nobuo Uematsu) really was.

Emily ended her question portion by asking each about his first game score and the experience. Kevin’s first was Unreal Tournament. Jason talked about how he came from a reality TV background, but got his start in video games with a game based on King Arthur. He said the contrast between scoring that and reality TV was that he was asked to generate the music really quickly, 50 minutes of music within 3 weeks, but he got to be more creative with it. What was inspiring for him was that everything he sent was met with praise from the game’s producers. Inon, on the other hand, started with Klingon Academy, where Charles Deenen’s first response to his first piece was “It’s terrible.”

Greg’s first game was actually Uncharted, coming off the sci-fi series, Firefly, which also has quite the fan following. His start came about differently. It seems that Naughty Dog created a reel of gameplay footage and put different composers’ music against it to find a fit, and they ultimately wanted Greg. Uncharted‘s writer, Amy Hennig, asked him to do it, and he said no. As another attempt, she asked him to at least come talk to them, to which he agreed, and the rest is history. Jack’s first video game soundtrack was Flying Saucer, which he worked on in Boston. The game’s development changed hands, which led to him scoring it twice. However, when it was complete, the company, Software 2000, only released the game in Germany. He said he sometimes asks audiences if they heard of the game and has yet to meet someone who has.

The panel ended with a question and answer round from the audience. One fan, a music teacher, asked about obtaining sheet music for their work because none is available. She told her story about how she eventually broke a song down by ear, so her class could play it. Although the composers all confirmed that it is indeed illegal to perform a song in this manner, they told her and others to keep doing it. They talked about how the the production companies ultimately control all the properties, which Kevin lamented because it meant some of his work will never see a commercial release. However, Greg, in such a noble and humble gesture, took that moment to talk about how much he values the fans and how they are why he does what he does, calling attention to the folks on YouTube who do their own mixes of their music. He said the video game and sci-fi fans are some of the warmest, most wonderful people he has ever produced music for, and he actually thanked everyone in the audience for being there. It really was a surprising and special moment.

Overall, it was a great panel, and it was wonderful to watch people I respect talk about their craft. I also met Greg O’Connor-Read, who represents them through his Top Dollar PR company, and he was really nice. Now go buy their music! 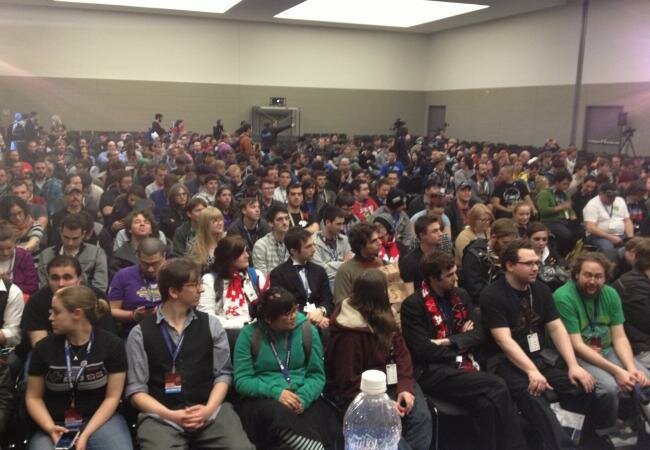 Believe it or not, I am somewhere in this photo.