Choice Soundtrack of the Day: 1080 Snowboarding 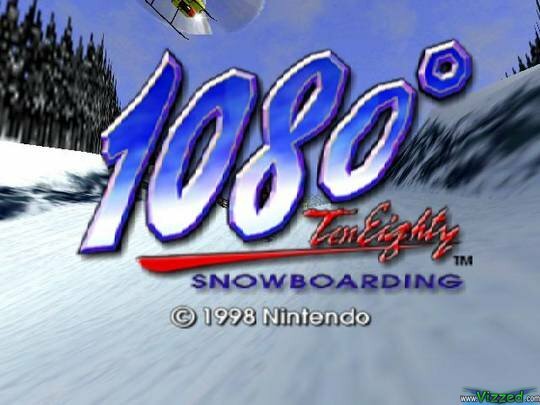 1080 Snowboarding was a technical achievement for the Nintendo 64 when it was released back in 1998. Impressive draw distances and character models, intuitive controls, excellent snow effects and of course, fantastic music for its time. It would remain the king of snowboarding games until the arrival of SSX on the PlayStation 2 two years later.

1080 Snowboarding‘s music in particular stood out from the rest of the game, propelling it just that much further into the hearts of gamers. The soundtrack, composed by Kenta Negata, was notable for the sheer fact that it used actual, spoken lyrics in some of the tracks, which was practically unheard of back then for cartridge-based video games. It also used fairly realistic sounding music samples, which worked great for the hip hop and drum and bass tracks, but not so much for the rock tracks.

It’s all quite laughable by today’s standards. The music reeked of the new, angsty styles of music emerging during the late 90s, as well as Nintendo’s own obsession with “attitude” and being the cool, hip video game company that was still playing out from the Super NES days.

Despite all of this, the soundtrack to 1080 Snowboarding is endearing and nostalgic, even at it’s worst, which is more than can be said for many game soundtracks of the time.

“Work Your Body” is probably THE classic track off the entire soundtrack. This catchy, chill-sounding character select music takes center stage often, as you constantly find yourself selecting different characters for different events. As mentioned early, just the sheer fact that lyrics were present is striking, not to mention the song itself is actually a decent hip hop song.

“Golden Forest” is one of the better examples of a rock song from the soundtrack. Even still, the cheesy-sounding guitar samples stand out a bit, but the drum samples are much better. It also features a pretty wicked organ in the background, which makes a whole lot more sense if you just listen to it in the song itself. Take my word for it, it works.

Whew boy, “Grasp Power” is where things really start to go downhill for 1080‘s soundtrack. The hilariously bad vocals sound reminiscent of Fred Durst if he were belting out complete gibberish, interspersed with random words in English whenever he felt like it. You kinda almost feel bad and want to give this guy credit, even if he is trying way too hard, screeching and warping his voice when he gets too intense, which is often. It’s so bad that it becomes endearing after a while.

To make things even more amusing, the lyrics weren’t included in this track during gameplay, it was all instrumental. Fervent fans who bought the soundtrack were rewarded with the addition of the vocal track, as if the record label thought they were doing the fans some kind of grand favor. The in-game, instrumental version is floating around somewhere on YouTube, but the official soundtrack version is the most common.

“Lost” is much more bearable, and includes no lyrics, just sweet, smooth drum and bass. Even though this track only plays after losing an event, you wouldn’t be considered crazy for losing on purpose just to hear this song. Rather than giving you the middle finger for losing by playing a super annoying track, the game just lets you sit back, relax, calm down and get ready to try again. It demonstrates the versatility of 1080‘s soundtrack, which for better or worse, was a landmark soundtrack for it’s time.

The soundtrack was released on disc May 20, 1998 through Pony Canyon Inc. However it is pretty difficult, if not impossible, to come by today through most legitimate sellers. Rare copies can be found randomly on the Internet, but tread carefully if purchasing from any unknown sellers.

Remembering Hiroshi Yamauchi and the music of...